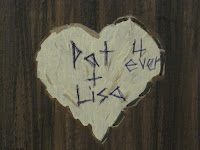 When I saw my husband over 23 years ago walk through the door of the family restaurant where I worked as a server, I knew he was the one for me in his blue-and-white-striped short-sleeved button-down shirt, blue pants and white shoes (remember, we’re talking late 80s here). But here’s the kicker–we had never met, and I was dated someone at the time. Yeah, I was 19 and totally basing this on his appearance.

The next night, he came back. This time, when he checked out, he asked if I had considered a pen pal. By this time, I had learned he was a Marine stationed about six hours south of me. I couldn’t write my address down fast enough.

We wrote for two months, sharing stories, telling secrets. This was before email so I had to wait an agonizing long time for a new letter. Each time I found one in my mailbox, my heart did the Lindy Hop.

During our 18-month long-distance relationship, he wrote me beautiful letters, gave me books of poetry, bought me jewelry, and sent flowers. Those gifts were special and touched my heart, but his words were what I loved most. One of the most special gifts he has given me was a love letter written on a piece of peeled birch bark. He found a downed tree while on a fishing trip with his dad, wrote the letter, rolled it like a scroll.

Another gift that is precious to me is a cedar chest he made from old black walnut flooring. He took scrap and turned it into something beautiful that holds our precious treasures–my dress from the USMC birthday ball, his letters tied with a ribbon, baby shoes from our boys.

This month, that handsome Marine and I will celebrate our 22nd anniversary.

Over the years, he shown his heart with flowers, gifts, words, but two weeks ago, he gave me one of the most supportive, romantic gifts–he read Lakeside Reunion.

Lakeside Reunion is the story of my heart that I dedicated to him. His act of heart is the most romantic gesture he has shown.

Your Turn: What is the most romantic gesture your spouse or significant other has done for you?