CFBA Blog Tour: When All My Dreams Come True

This week, the
Christian Fiction Blog Alliance
is introducing
When All My Dreams Come True
Harvest House Publishers (February 1, 2011)
by
Janelle Mowery

Beginning in 1998, Janelle Mowery coordinated and wrote for the Children’s Ministry of a Christian website called The Invisible Connection. When the holder of that site discontinued the ministry and website in the year 2000, she began writing inspirational fiction romance novels.

Janelle became a member of American Christian Fiction Writers in the year 2002 and is an active member and leader in one of their critique groups, which has provided many opportunities for growth and development. In 2003, she entered her first novel in the Noble Theme contest and was named one of the top ten finalists in the historical category. In 2004, she had a short story titled ‘A Fair Chance’ published in the e-magazine, Romancing the Christian Heart. In 2005, her third novel, entered in the San Gabriel Writers’ League ‘Writing Smarter’ Contest, won first place. Also, Janelle’s fifth novel made it to the top ten finalists in the Noble Theme contest.

In 2006, she signed her first contract with Barbour Publishing in their Heartsong Presents Mysteries line. The novel, Where the Truth Lies, which she co-authored with Elizabeth Ludwig, released in spring of 2008. The second and third mysteries of the series, Died in the Wool and A Black Die Affair, is set for release in 2011.

Janelle has signed with Harvest House for a historical series set in Colorado. Release of the first book is set for early 2011. She has also signed with Summerside Press. Her novel, Love Finds You in Silver City, Idaho, released in October 2010.

Janelle has been married twenty-one years and is the mother of two sons. She is a member of Sandy Point Bible Church and serves as Treasurer. She also assists in the church’s teen program. 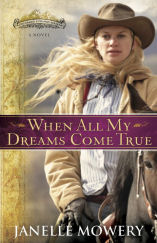 Bobbie McIntyre dreams of running a ranch of her own. Raised without a mother and having spent most of her time around men, she knows more about wrangling than acting like a lady. The friendship of her new employer awakens a desire to learn more about presenting her feminine side, but ranch life keeps getting in the way.

Ranch owner Jace Kincaid figures the Lord is testing his faith when a female wrangler shows up looking for work. Bobbie has an uncanny way of getting under his skin, though, and he’s surprised when she finds a home next to his heart. But when his cattle begin to go missing and his wranglers are in danger from some low-down cattle thief, can Jace trust God, even if it may mean giving up on his dreams?

An adventurous novel of faith, hope, and love in the Wild West.

If you would like to read the first chapter of When All My Dreams Come True, go HERE.