At His Command Book Review 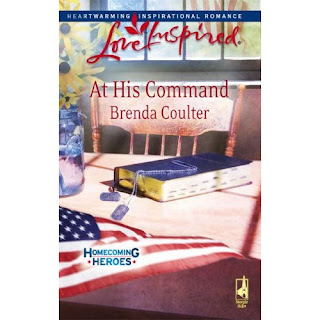 At His Command
Brenda Coulter
Steeple Hill Love Inspired
ISBN: 978-0373874965
September 2008
A week or so ago, I received a newsletter update from Brenda Coulter. She sent information about a contest she was doing to promote her new book, At His Command. She asked her newsletter readers to send their favorite jokes and to make her laugh. A huge fan of puns and cornball humor as my son tells me, I sent my favorite pun to Brenda.

The friars were behind on their belfry payments, so they opened up a small florist shop to raise funds. Since everyone liked to buy flowers from the men of God, a rival florist across town thought this was unfair. He asked the good fathers to close down, but they would not. He went back and begged the friars to close. They ignored him. So the rival florist hired Hugh MacTaggart, the roughest and most vicious thug in town to “persuade” them to close. Hugh beat up the friars and trashed their store, saying he’d be back if they didn’t close up shop. Terrified, they did so, thereby proving that: Hugh, and only Hugh, can prevent florist friars.

I received an e-mail from Brenda…

Lisa, Contest #1 is over and I was going to send you an “I’m sorry” e-mail, but my husband just leaned over my shoulder and read your joke and said, “I don’t care if you already notified the three winners. Give that woman a prize. So a book will soon be on it’s way to you…

Yay! I won a book. I’m an avid reader and free books support my habit. 🙂 I was especially excited because Brenda is one of my favorite Love Inspired authors.

I received At His Command in the mail this past Friday, started the book during nap time, and finished before dinner. What a heartwarming story.

At His Command is the third book in the Homecoming Heroes by Love Inspired and tells the story of Jake Hopkins, a former Apache pilot, and Madeline Bright, a cheerful army nurse and kid sister of Jake’s deceased best friend. Jake carries physical and emotional scars from his wounds sustained in an air attack that downed his Apache and killed his best friend. Determined to fight his growing attraction to Maddie, he forces himself to keep his distance, but her constant presence sends this jaded pilot-turned-attorney’s life into a tailspin. Jake doesn’t believe he deserves the happiness and stability he would need to have a life with Maddie. Fortunately, God had other plans…

I really enjoyed this book because I married a Marine nineteen years ago and adore military romances. Our service men and women deserve our daily prayers and gratitude as they preserve our freedoms. Jake’s emotional wounds and anger at God are realistic. Maddie’s cheerfulness came with a personal burden and price. Brenda did her research and depicted military base life quite well. I adored one of her secondary characters and hope he receives his own story. The ending felt a little rushed to me, but it was quite satisfying and made my heart happy. Overall, the book was well-written with the flawed characters, tenderness, and spiritual growth I’ve come to expect from a Brenda Coulter novel.

If you need further persuasion to buy At His Command, check out the cute book trailer that Brenda created:

At His Command Book Trailer

To learn more about Brenda and the other books she has written, visit her website or her No Rules, Just Write blog.