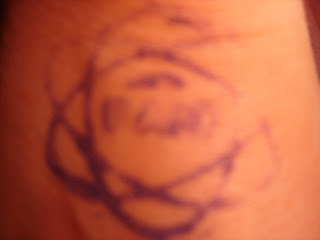 He himself bore our sins in his body on the tree,
so that we might die to sins and live for righteousness;
by his wounds you have been healed.
1 Peter 2:24
This morning during Sunday school, one of my little S.S. boys asked me about the stamp on my hand. I told him that I had gone to the fair the night before and when we paid for our tickets, our hands were stamped to show we had paid.

The photo doesn’t show the stamp too clearly because my hands have been washed many times since I received the stamp. It will wear off over the next several days, but for now I can deal with the ink. Each time I look at it, it reminds me that my debt has been paid.

Jesus Christ died on the cross and paid the price for our sins. His hand stamp won’t wash off. His hand is scarred where the nails were driven through flesh and bones to nail him to the cross. When Jesus reappeared to the disciples after He had risen from the dead, Thomas wasn’t among them. When they told him they had seen the Lord, Thomas said, “Unless I see the nail marks in his hands and put my finger where the nails were, and put my hand into his side, I will not believe it.” (John 20:25)

Jesus appeared to the disciples a week later. This time, Thomas was present. He said to Thomas, “Put your finger here; see my hands. Reach out your hand and put it into my side. Stop doubting and believe.” (John 20:27)

Immediately Thomas knew the man before him was his Lord. Jesus told him, “Because you have seen me, you have believed; blessed are those who have not seen and yet have believed.” (John 20:29)

Even though my fair stamp will wear off eventually, I don’t need PAID imprinted on my hand to know the price had been paid for me. I am so humbled to know that God loved me so much that He sent His only Son to take this lowly sinner’s place so that I may have eternity in Heaven.

Faith is believing without seeing. Even though I can’t see God, I experience Him in my daily life. I have a greater sense of peace during trials. I’m awed by His creation. He is my Comforter, my Protector, my Lord, my Heavenly Father. He can be yours only for the asking.