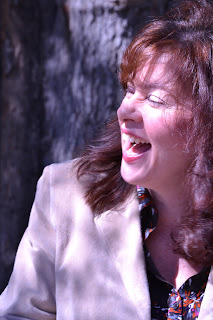 I’m overjoyed to have my friend and mentor Rachel Hauck as a guest blogger today. You can read more about her latest release, The Wedding Dress, along with my review here.
Rachel lives in sunny, though sometimes hurricane plagued, central Florida with her husband and their ornery pets. She is the bestselling author of Carol award winner Sweet Caroline, and RITA finalist Love Stars With Elle, and of the critically acclaimed fiction collaboration with multi-platinum country artist Sara Evans, The Songbird Novels.
Rachel earned a degree in Journalism form Ohio State University and is a huge Buckeyes football fan. She is the past President of American Christian Fiction Writers and now sits on the board as an Advisor. Visit her web site at www.rachelhauck.com to read her blog, and follow her on Facebook and Twitter.
This book started on Twitter. In an exchange of 140 character or less exchanges between tweet buddies.
“Next time you’re in town, call me, we’ll get together.”
“Hey, I wanna come.”
“Me too.”
“Then let’s do it.”
Ten tweets later and a couple of emails, four friends put their talk into action and hightailed it to Tennessee for a girls’ weekend.
Tami Heim, Kim Cash Tate, Jennifer Deshler and her adorable daughter Jordan, and I spent forty-eight hours talking, eating, and laughing. I spent an unprecedented sixteen hours in my pajamas. But I suppose that’s too much information.
Tami’s daughter had recently married, so the conversation turned to weddings and, specifically, the wedding dress. Something Tami said . . . about her own wedding, about finding her daughter’s perfect gown, launched me into story world. I fell behind the conversation and started to dream.
What if there was one gown worn by four women . . . over . . . a hundred years? 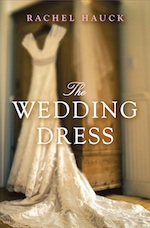 Who were these women? What happened to them and the dress? How did they get the dress? Why would they wear it? When did they wear it? Does it fade or wear out? Does it fit everyone? I mulled the story over for the rest of the weekend.
My mom, brother, sister-in-law, and husband offered ideas and enthusiasm when I returned from the weekend and downloaded my idea on them.
I thought this would be a book for another time, but a week later, standing in the middle of Wal-Mart on a Friday afternoon, I called my editor and pitched her the idea.
Ami McConnell caught the vision and loved the idea as much as I did.
A year and a half later, that’s the book I’m offering to you now.
It was a fun book to write.
My biggest challenge was mapping out how the dress moved from woman to woman, decade to decade.
I mean, really, the possibilities were endless.
Did I want it to all take place in one city or two or four? Did the women live across the US? Did they travel to a central city where most of the story took place?
I decided to set the story entirely in Birmingham. A single setting added a cohesiveness and sense of connection.
It was enough I was going to present to readers that one dress was worn by four women in four different decades.
It was enough that I was going to convince you all that the dress never wore out, never needed to be altered, was in style for each woman and fit her perfectly when she tried it on.
When in doubt, keep it simple, right?
I’d done some plotting and thinking on the book when I went to a retreat with a couple of writer buddies Debbie Macomber and Karen Young.
On my brainstorm day, we hunkered down and figured out the core plot. Once I got home, it was easy to imagine who the dress moved from decade to decade.
One thing I really wanted to communicate is how our lives are connected whether we realize it or not. I wanted to show Jesus in the story to remind us He is holy God and wholly man.
He was there for our first bride, Emily. And there for our last bride, Charlotte. He is the purple thread that binds us all together.
Most of all, I wanted this book to give you hope. To give you eight hours of escape. And a sigh of contentment in the end.
Thank you, Lisa, for having me on the blog. You’re the bomb!
Your Turn: If you are married, have you worn a wedding dress with history? Have you preserved your wedding dress to pass down to a new generation? If you’re not married yet, what are you looking for in a wedding dress?
← Prev: Litfuse Blog Tour: The Wedding Dress Next: What is beauty? →