Lisa Wingate is an award-winning journalist, magazine columnist, popular inspirational speaker and a national bestselling author of sixteen books. Her first mainstream novel, Tending Roses, is in its eighteenth printing from Penguin Putnam. Tending Roses is a staple on the shelves of national bookstore chains as well as in many independent bookstores.

Recently, Lisa’s Blue Sky Hill Series, set in Dallas, received national attention with back-to-back nominations for American Christian Fiction Writers Book of the Year Award for A Month of Summer (2009) and The Summer Kitchen (2010). Pithy, emotional, and inspirational, her stories bring to life characters so real that readers often write to ask what is happening to them after the book ends.

Lisa is one of a select group of authors to find success in both the Christian and mainstream markets, writing for both Bethany House, a Christian publisher, and NAL Penguin Putnam, a general market publisher. Her bestselling books have become a hallmark of inspirational fiction. Her works have been featured by the National Reader’s Club of America, AOL Book Picks, Doubleday Book Club, the Literary Guild, Crossings Book Club, American Profiles and have been chosen for numerous awards.

When not busy dreaming up stories, Lisa spends time on the road as a motivational speaker. Via internet, she shares with readers as far away as India, where her book, Tending Roses, has been used to promote women’s literacy, and as close to home as Tulsa, Oklahoma, where the county library system has used Tending Roses to help volunteer mentors teach adults to read. Recently, the group Americans for More Civility, a kindness watchdog organization, selected Lisa along with Bill Ford, Camille Cosby, and six others as recipients of the National Civies Award, which celebrates public figures who work to promote greater kindness and civility in American life. 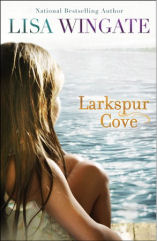 Adventure is the last thing on Andrea Henderson’s mind when she moves to Moses Lake. After surviving the worst year of her life, she’s struggling to build a new life for herself and her son as a social worker. Perhaps in doing a job that makes a difference, she can find some sense of purpose and solace in her shattered faith. For new Moses Lake game warden Mart McClendon, finding a sense of purpose in life isn’t an issue. He took the job to get out of southwest Texas and the constant reminders of a tragedy for which he can’t forgive himself. But when a little girl is seen with the town recluse, Mart and Andrea are drawn together in the search for her identity. The little girl offers them both a new chance at redemption and hope–and may bring them closer than either ever planned.

If you would like to read the first chapter of Larkspur Cove, go HERE.

← Prev: Writing is Like Knitting Socks Next: Writers Need Hobbies! →