CFBA Blog Tour: According To Their Deeds

This week, the
Christian Fiction Blog Alliance
is introducing
According To Their Deeds
Bethany House (March 1, 2009)
by
Paul Robertson 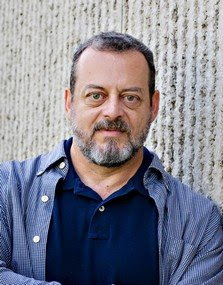 Paul Robertson is a computer programming consultant, part-time high-school math and science teacher, and the author of The Heir. He is also a former Christian bookstore owner (for 15 years), who lives with his family in Blacksburg, Virginia. 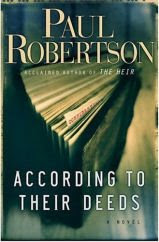 A Deadly Game of Justice Versus Mercy Charles Beale lives outside the shadow of Washington, D.C. Politics and power matter only when a client crosses the Potomac to visit his Alexandria Rare Books shop.

But that all changes when a former client–a man deeply connected in the Justice Department–is found murdered after a break-in gone bad. When Charles reclaims at auction the books he’d once sold, he quickly discovers he’s bought more trouble than he could have ever imagined.

Inside one volume are secrets. A collection of sins that, if revealed, could destroy reputations, careers–even lives. Charles soon learns he isn’t the only who knows. Going to the police means ruining a multitude of lives. But staying silent puts a target on his shop, his wife–and himself. Charles must decide: Should one mistake really cost you everything?

If you would like to read the first chapter of According To Their Deeds, go HERE