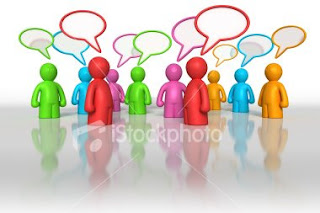 Most people are sound asleep at that hour in the morning, unless they’re third-shifters or my brother-in-law. My alarm wasn’t set to go off for another hour and forty-two minutes. Too early to get up, so I pulled the sheet to my chin and rolled over to catch a few more minutes of sleep.

As soon as my eyelids cracked open to glance at the time, the voices in my head yawned and stretched and started their incessant chattering. They elbowed and pushed to be at the front of my consciousness.

I’m a writer and like most of my writing friends, we talk to the voices in our heads. This career choice may excuse us from taking a walk with the men in white coats, but it does cause us to be on the receiving end of some pretty weird looks.

Case in point…a couple of months ago, three colleagues and I were having coffee (chai for me) at our favorite coffeehouse. While ranting and chatting about work-related topics, I slipped in a few tidbits about my current writing project. Two of the friends knew I wrote. One friend, though, was a new, but pleasant addition to our group. I casually mentioned something about the voices in my head. You would’ve thought I had just told them I was quitting my job to take up basket weaving in Papua New Guinea. They tease me good-naturally and support me heart’s desire. I took a leap of faith this week and sent them the first two chapters of my novel to get a reader’s perspective. Haven’t heard a peep from them, so I’m waiting patiently, or trying to.

Non-writers are like muggles–they don’t “get it.” While I don’t profess to have magical abilities like Harry Potter and friends, but I can create a story from a headline, a snippet of a song, or even a scent that evokes a memory.

Writers have a tendancy to “what if” a situation in order to take an idea and spin it into a story. Last night my son and I watched a show on Nick at Nite, which needs to be a separate blog post. The sit-com’s episode was situation that touched on one of my hot buttons, but it had a twist. I found myself wondering, “what if” and ended up creating a backstory for a character I plan to use in a future novel.

So while the roosters were still asleep, I laid in bed and listened to the house noises, hubby’s breathing, and my characters as they lounged in the easy chairs in the creative corner of my brain and dissected a plotting problem I was having with a scene in my current work-in-progress. By 5 am, I realized I wasn’t going back to sleep, so I slid out of bed and headed for my Mac to transcribe what played out in my head. So while most people worry if they start hearing voices, I worry when I don’t because that means my muse has gone AWOL.