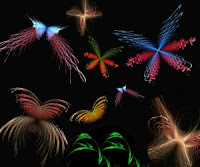 Imagination is more important than knowledge. For while knowledge defines all we currently know and understand, imagination points to all we might yet discover and create.

A writer’s imagination can be a scary place. Good thing only God can read my thoughts.

It was still dark outside this morning when I carried the trash to the can on the back porch. My backyard, shrouded in darkness, took on new shapes and lifeforms. Of course, my imagination ran wild. I was out there for about thirty seconds before rushing inside and locking the door behind me. My muse yawned and stretched as my what if mechanism kicked into full gear.

What if a woman went about her daily routine, took the trash outside, and disappeared while her family was in the house?

I’m not a suspense writer and hate to be spooked, but I figured that one question could filter out in many different directions. When would her family notice she was missing? What happened to the woman? Did she leave on her own accord? Was she forced to flee? Did someone take her? If so, who? Why? What clues would be left behind? How would they begin to search for her?

I finished cleaning up a mess in my kitchen that involved little children and frosting. Many of you may be smiling and nodding right now because you understand what I’m talking about. Again, my imagination went rampant. What if someone tampered with bakery goods and a classroom of children were poisoned? Who would do such a vile thing? What would motivate this person to act this way?

My son recently finished a series by a well-known Christian suspense writer. He was blown away by some of the things in the book and commented to me, “Man, these writers must be pretty messed up to come up with some of this stuff.” I laughed and disagreed with him because I know how a writer’s imagination works. I remember one of my favorite writers telling me how she got strange looks while on an airplane and she and her seatmate were plotting how to kill someone. She quickly reassured those who overheard her that she was plotting a novel. This woman is one of the sweetest people I’ve ever met and a new grandmother. Not a murderous bone in her body. Her imagination, on the other hand…

← Prev: CFBA Blog Tour: Murder on the Ol' Bunions Next: We have a winner! →